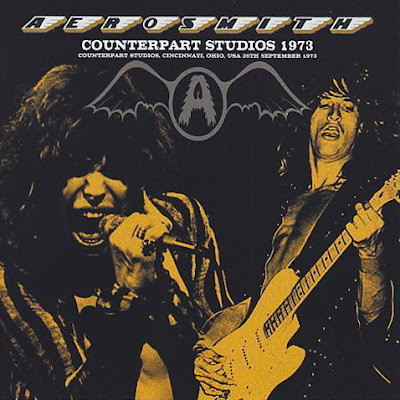 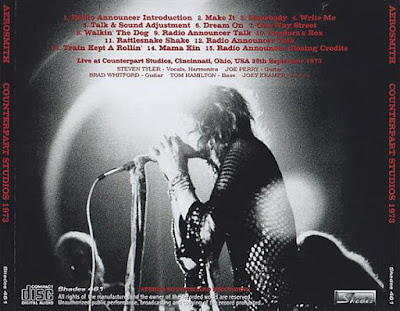 Format : 1 CDR. 15 tracks ~ 63 min
Label : shades 461
Disc :
01 Radio Announcer Introduction
02 Make It
03 Somebody
04 Write Me
05 Talk & Sound Adjustment
06 Dream On
07 One Way Street
08 Walkin' The Dog
09 Radio Announcer Talk
10 Pandora's Box
11 Rattlesnake Shake
12 Radio Announcer Talk
13 Train Kept A Rollin'
14 Mama Kin
15 Radio Announcer Closing Credits
Recorded live :
At the Counterpart Studios
Cincinnati, Ohio, USA
September 26th. 1973
Comments :
There is some controversy as to the actual date of thisshow with the inserts of this release claiming it
occurred on September 26th, 1973 while other sourcesplace it sometime in early October.There have been
some doubts as to where this was recorded with some believing it could be the concert from Cincinnati‘s
Music Hall on October 10, 1973. This broadcast wasrecorded at the Counterpart Creative Studios in
Cincinnati probably between October 9-11, 1973 tocoincide with their tour date supporting Mott The
Hopple. Tyler also says on introducing Pandora’s Box,“we’d like to play a boogie from our new album,
entitled Night in the Ruts” – which was the titleGet Your Wings initially went under.
The sound quality is a very good stereo recordingwith the instruments well balanced and a nice wide
sound stage. The guitars are forward and a bit in your face but do not overwhelm the rest of the instruments and there is nice warmth to the recording with all frequencies well represented. There is a also slight distortion during loud passages which reminded me of the effect you get if you set the recording level too hot on a cassette recorder overloading the tape but it is not obtrusive and can be noticed with a slight sizzle on Joey Kramer’s cymbals and Steven Tyler’s voice at times.
The other oddity I found was there were several very brief instances where the sound flutters, during “Write Me”, as if a radio station signal was fading in and out or there was tape damage but they are very brief and not too distracting.
The show begins with an announcer’s introduction:
“Welcome KRQ’s first radio concert tonight live at Counterparts Studio and being broadcast in 16 track stereo Columbia recording artists Aerosmith. KRQ’s phase three will feature more radio concerts with name artist but more on that later but now right now Aerosmith”.
There are 4 other instances where the announcer cuts in after several songs are played for commercial breaks and the closing comments. One of the interesting things about this recording is it seems to be the radio stations raw master tape of the performance as you get to hear all the commercial break in studio banter between the announcer and band where the radio audience would have heard a commercial.
The most interesting banter for me was after “Write Me” we hear the announcer call for a one minute commercial break and then ask someone if they are timing it from the one minute mark. We also get to hear a slightly annoyed Steven Tyler complaining of sound levels fluctuating and ask that they return to the previous level as the announcer counts down the return from commercial.
All the songs are well played but highlights for me were a rocking version of “One Way Street”, a rare version of “ Rattlesnake Shake” and the two not yet released songs “Pandora’s Box” and “Train Kept a Rollin” which would appear on the bands 1974 second album  “Get Your Wings”.