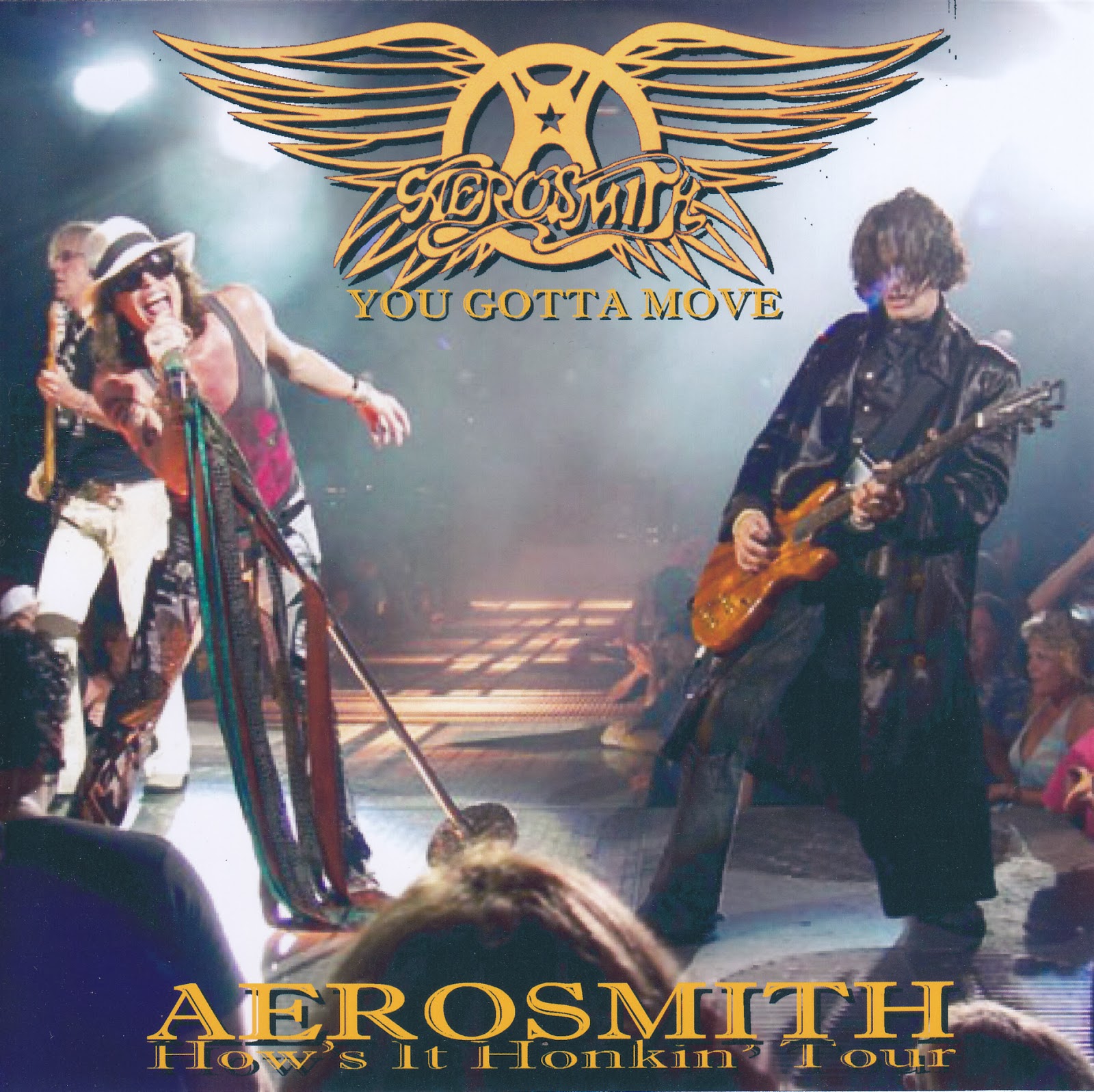 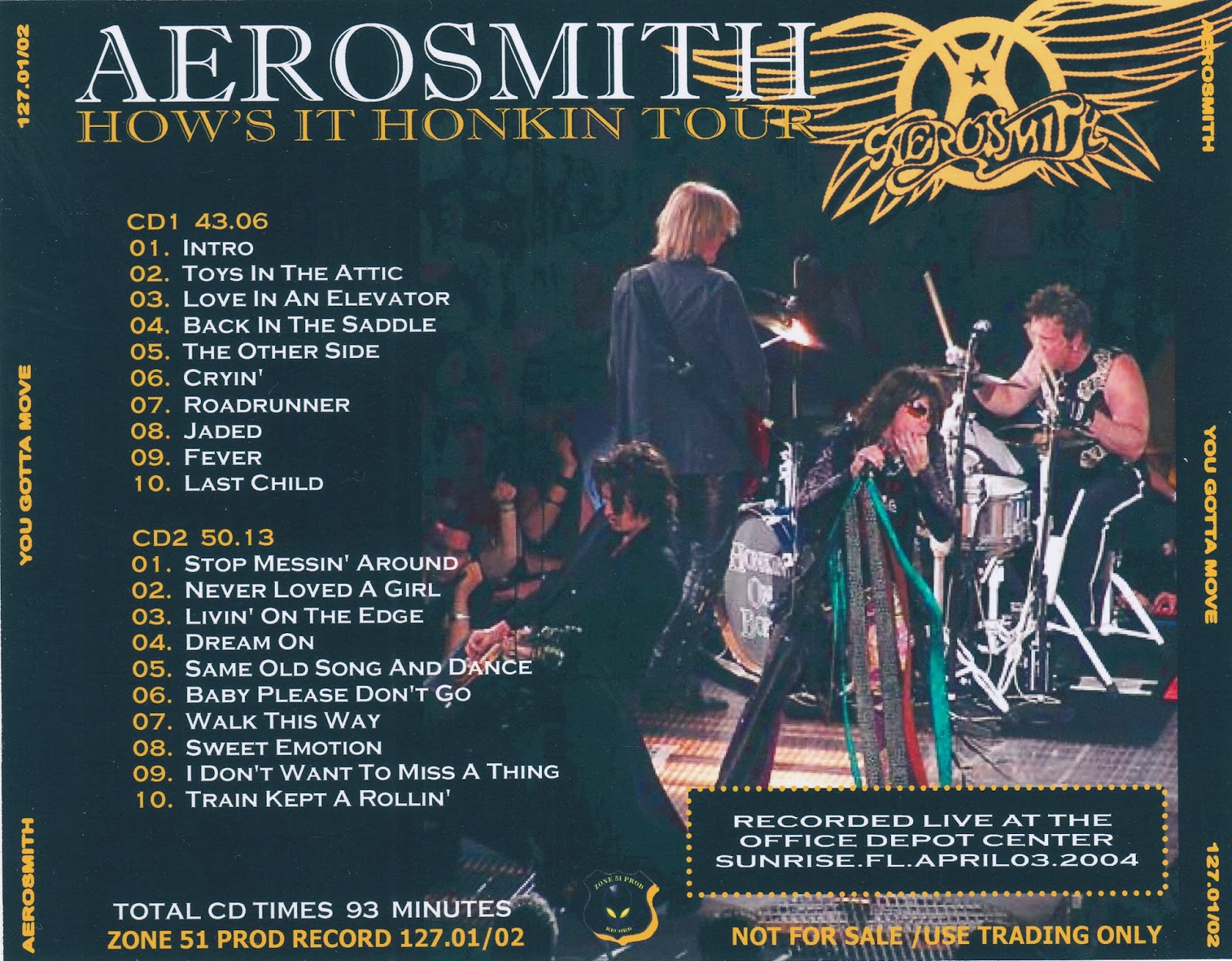 Comments:
Same set as previous show at Tallahassee
(and for 7 sets on this tour)
The last time the band played at this venue
was November 29, 2001 when it was called the
National Car Rental Center (and from that
performance, the track "Just Push Play"
was aired on the Dick Clark special,
New Year's Eve 2001).
The show was taped by A&E.
The concert footage was incorporated into a musical documentary called "Aerosmith : You Gotta Move" which was broadcast on June 4th, 2004 (9pm ET)
Publié par mothership51 à 8:28 PM No comments: 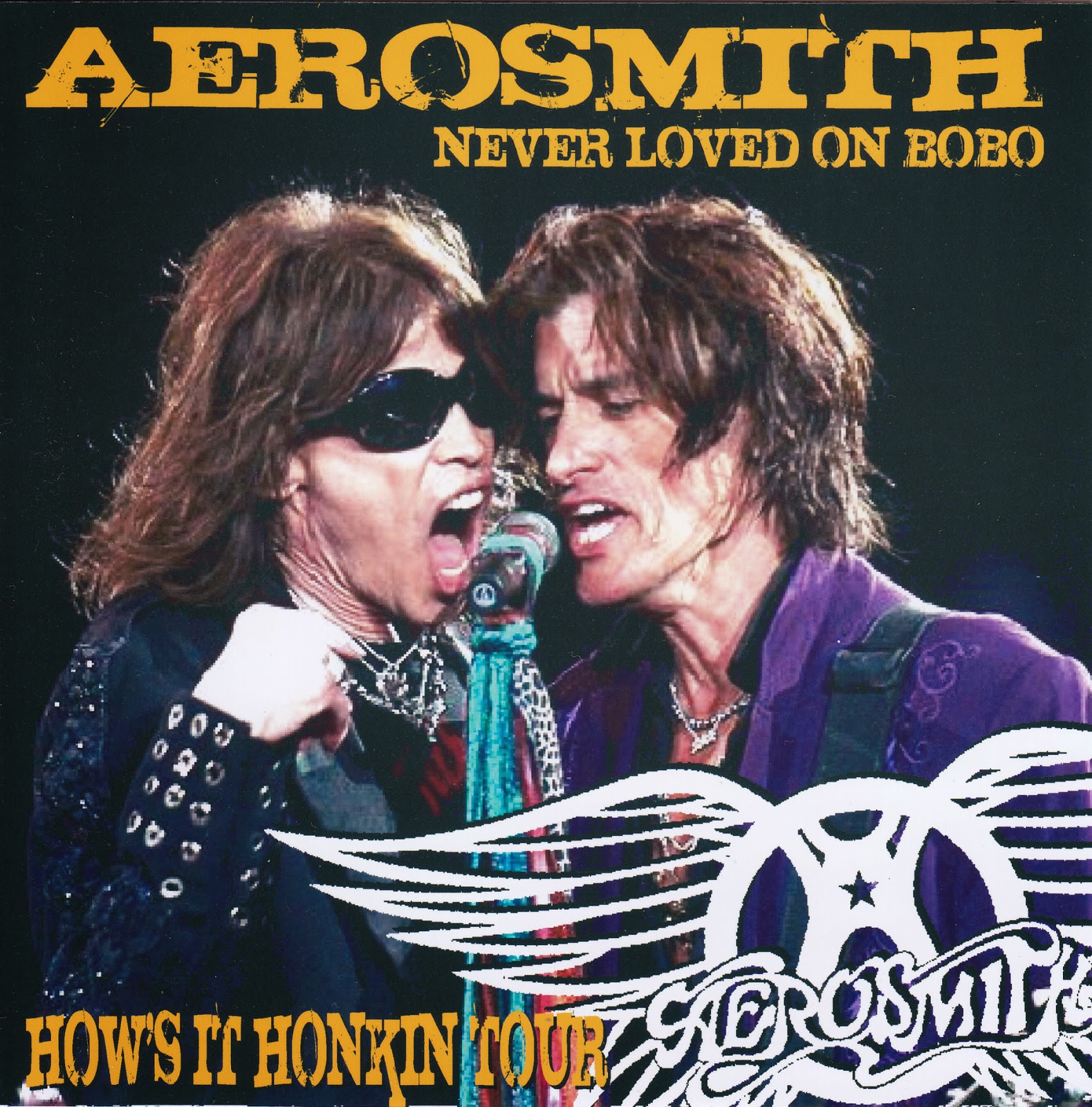 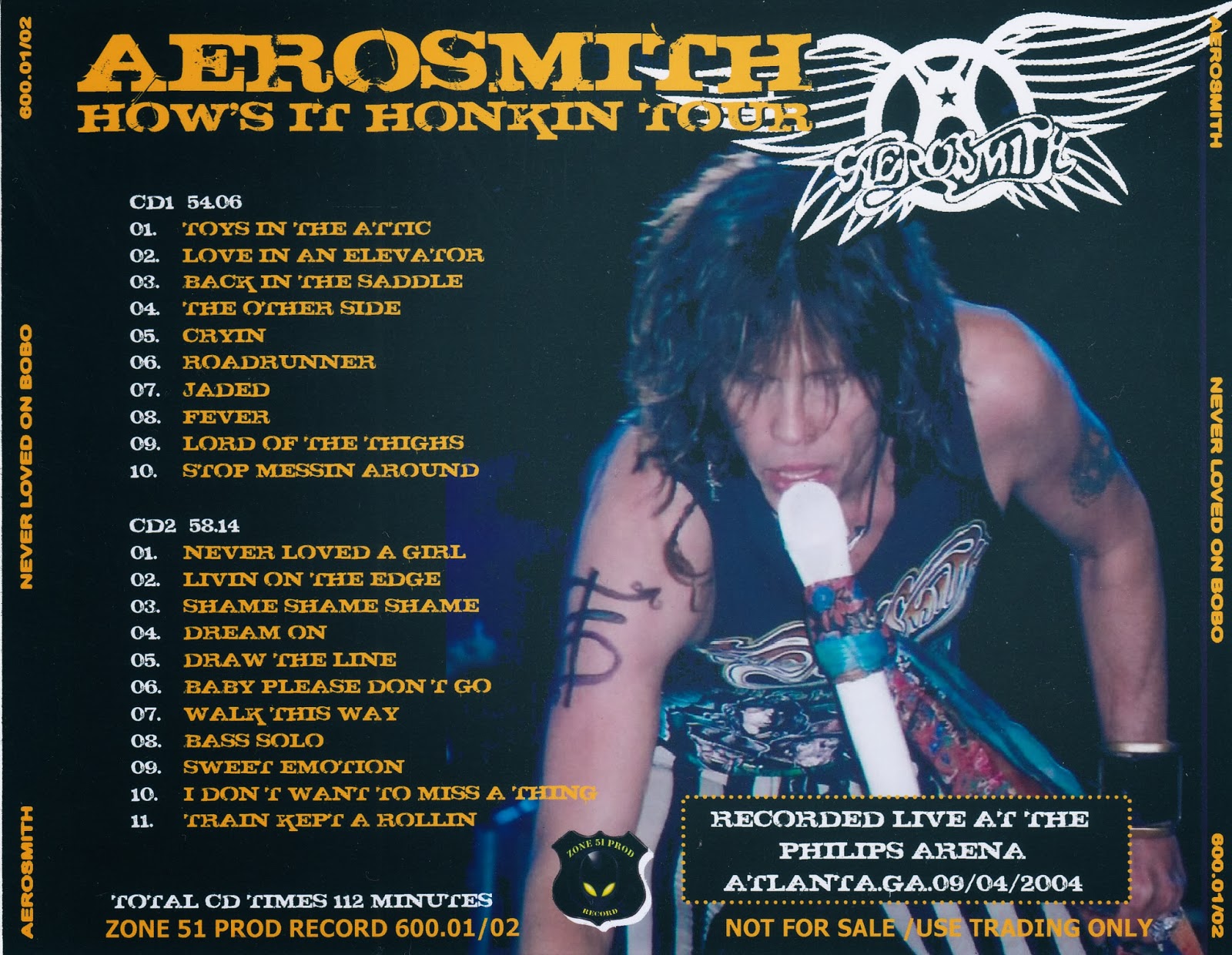 Comments:
First tour play of "Shame Shame Shame"
which was first played on the
"Rocksimus Maximus" tour
(at both Wantagh, NY shows in August 2003).
It is the first additional full track played from
the new album since the tour began bringing
the total in the set to 5.First set of the tour to add
another song to the set bringing the number to 20.
audience recording
Publié par mothership51 à 8:26 PM No comments: 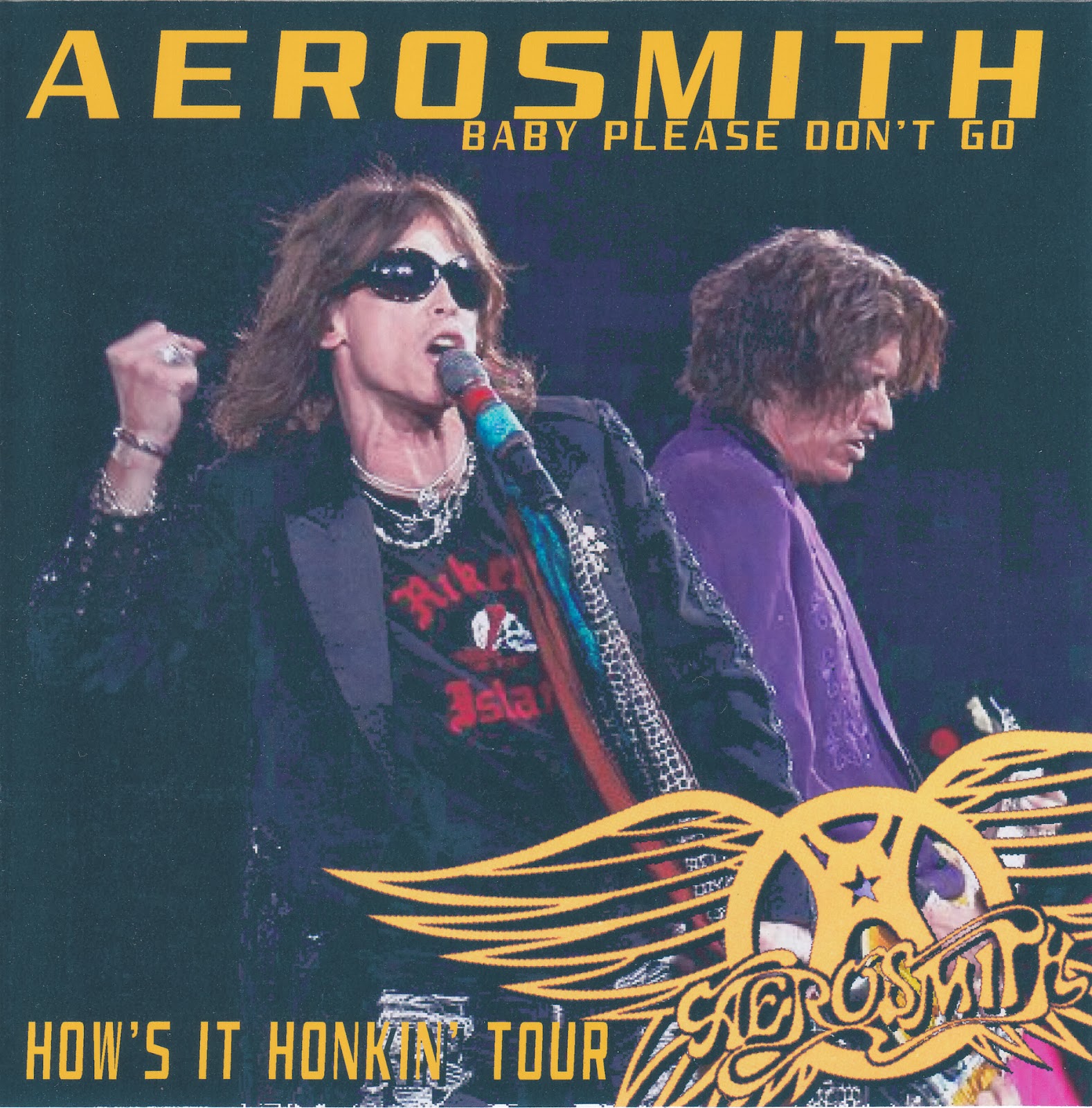 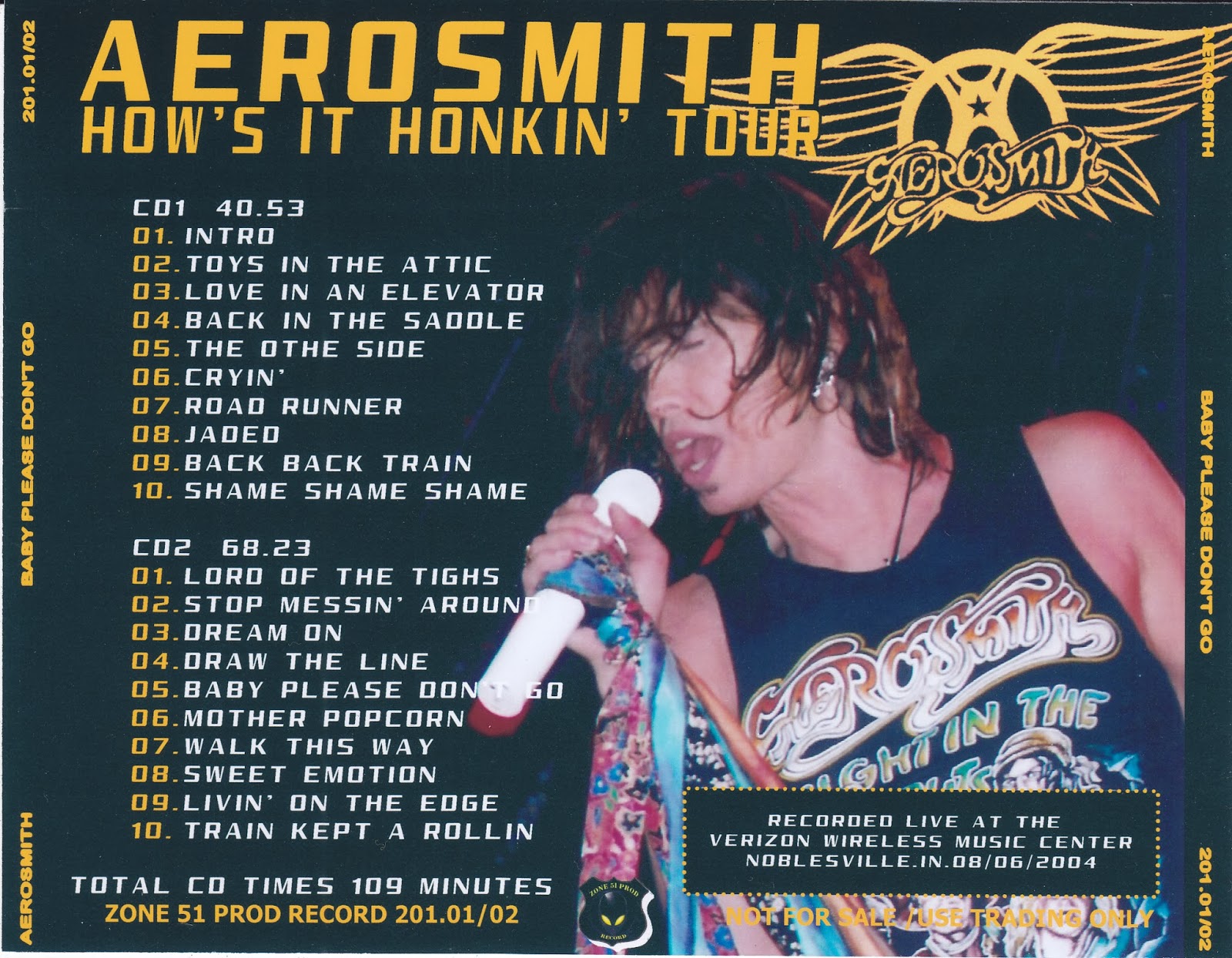 Comments:
"Never Loved A Girl" disappears out the set
once again dropping the "Honkin' On Bobo"
numbers in the set back to 5 (and set drops
back to 19 numbers with "Last Child" also
rested).A first on the tour for
"Livin' On The Edge" being in the encore numbers.
audience recording.
Publié par mothership51 à 8:21 PM 1 comment: 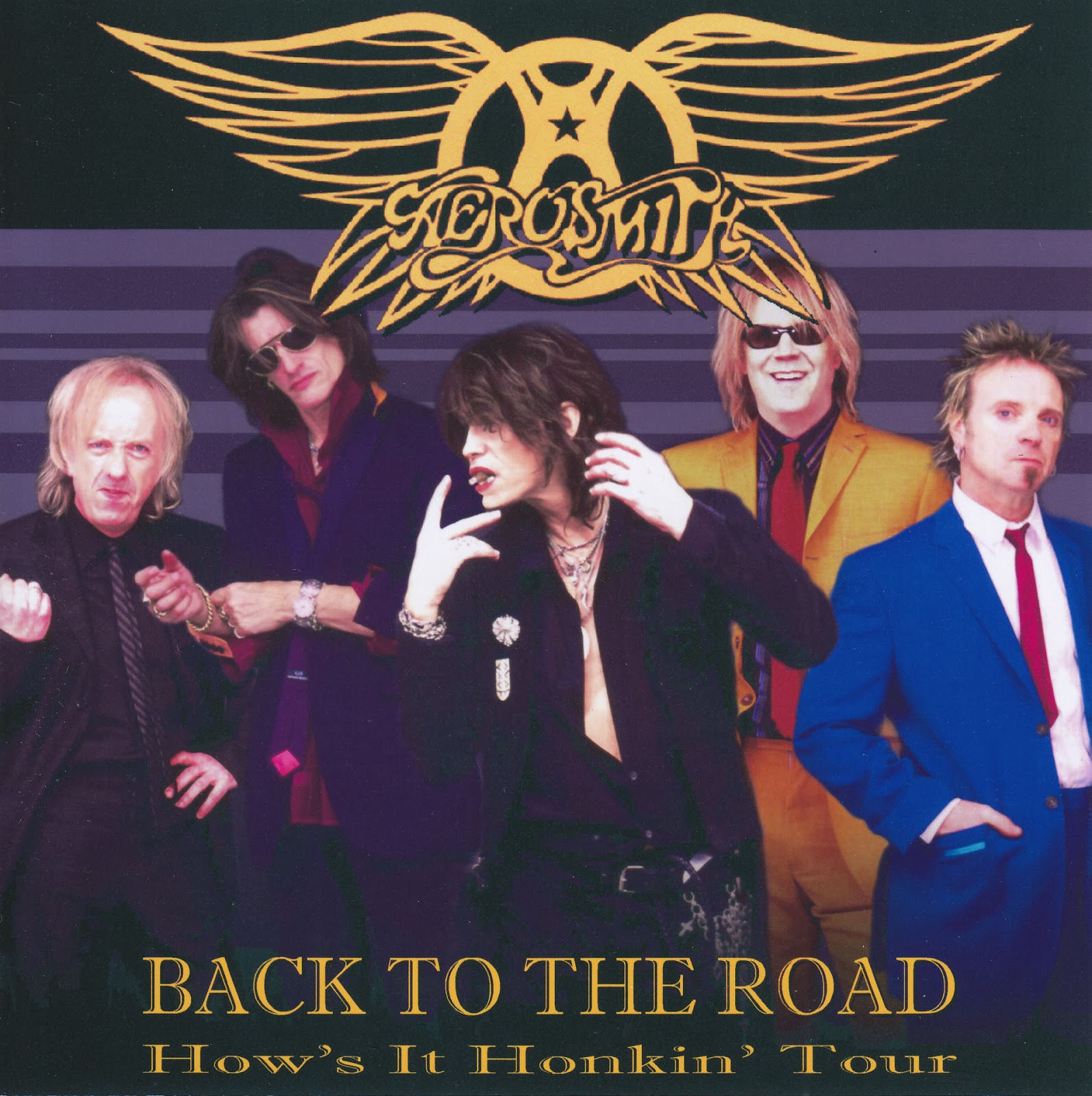 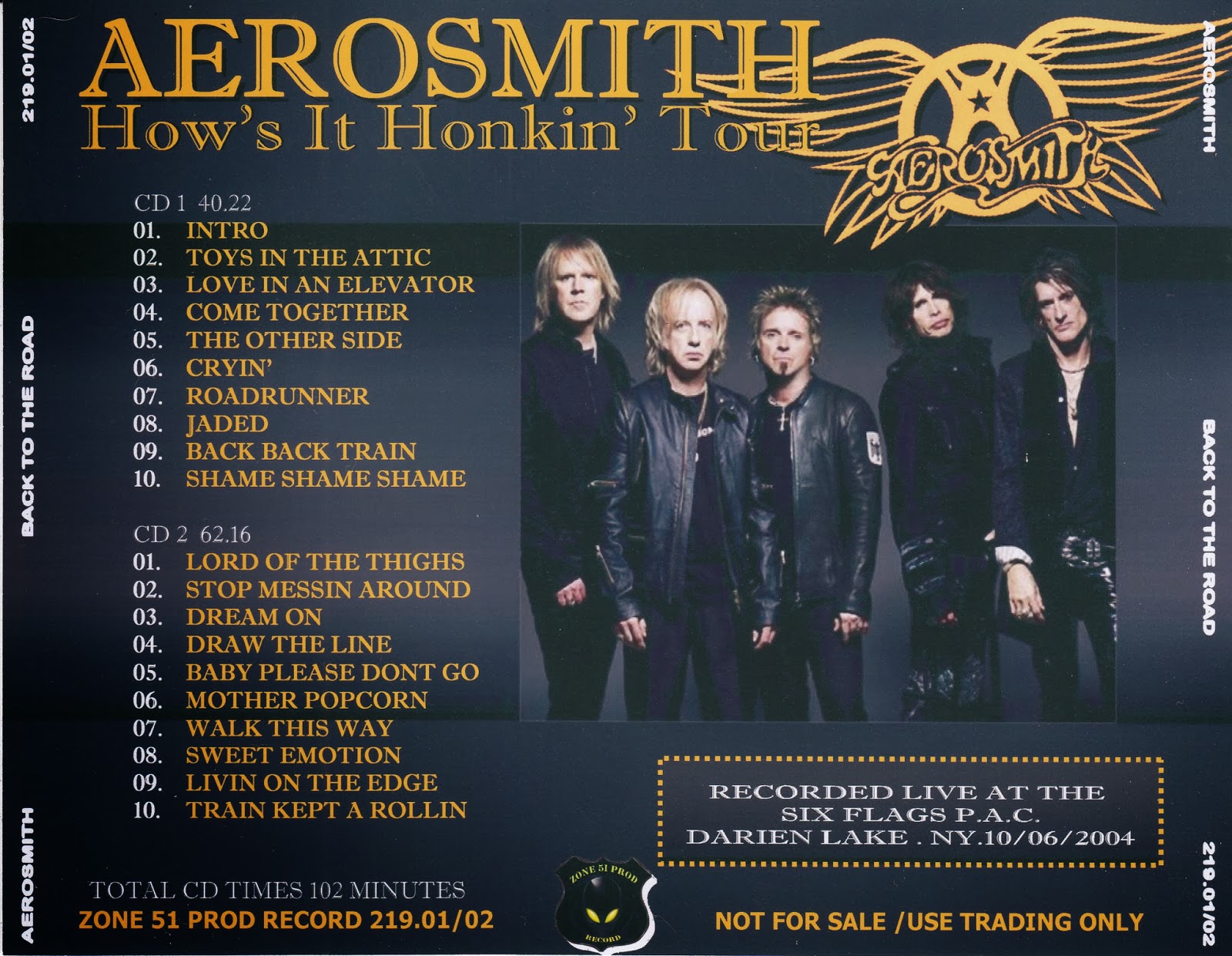 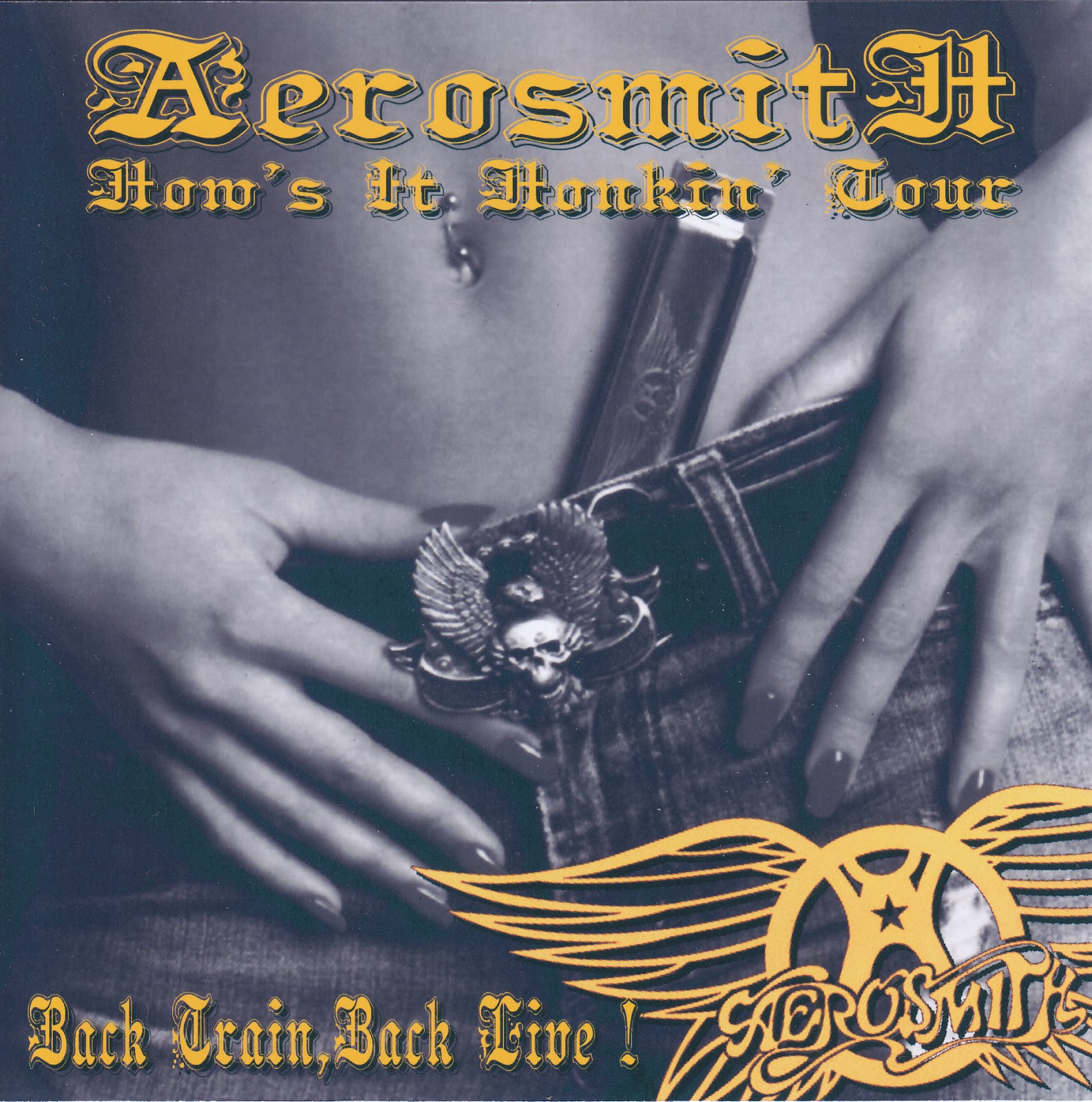 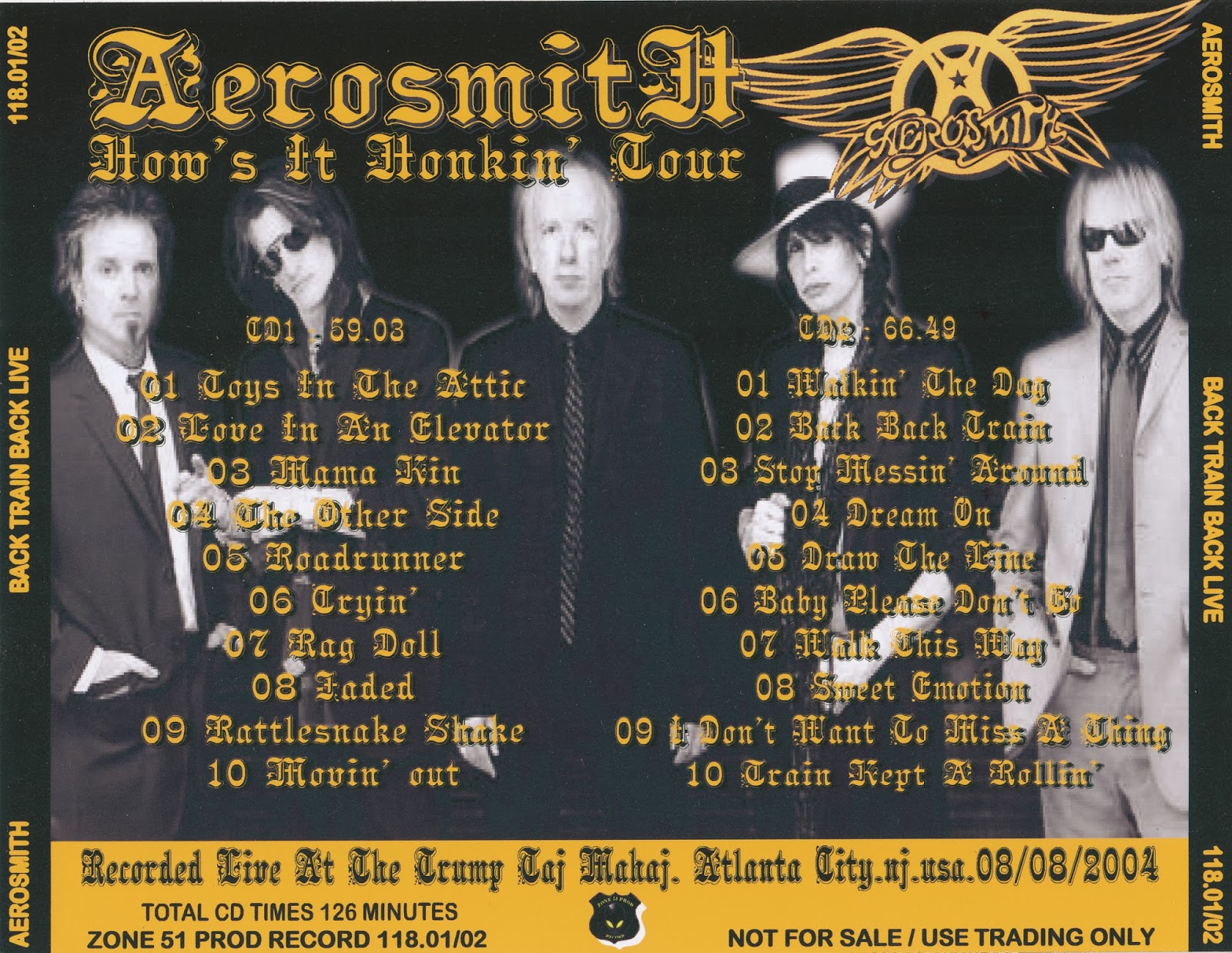 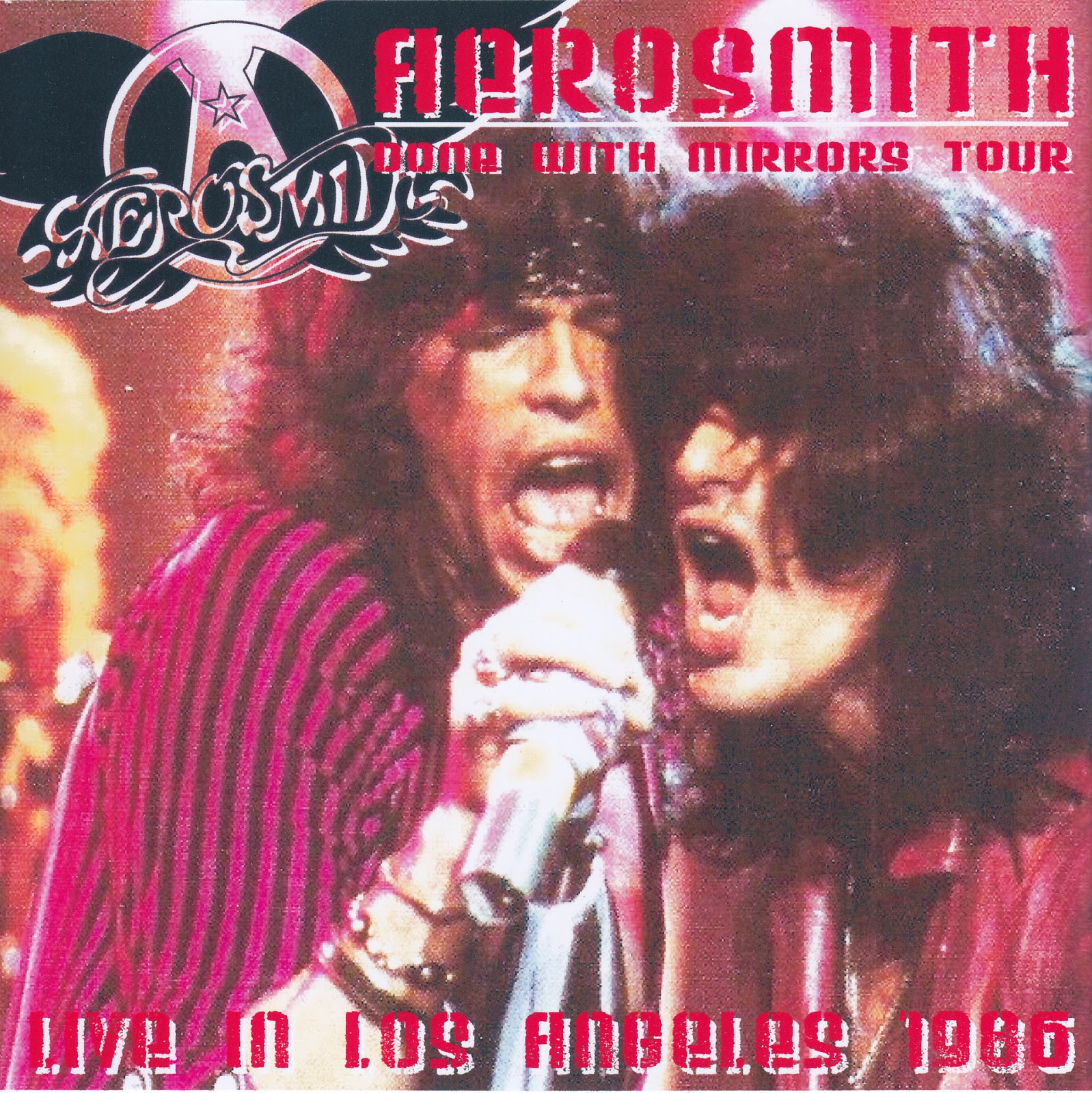 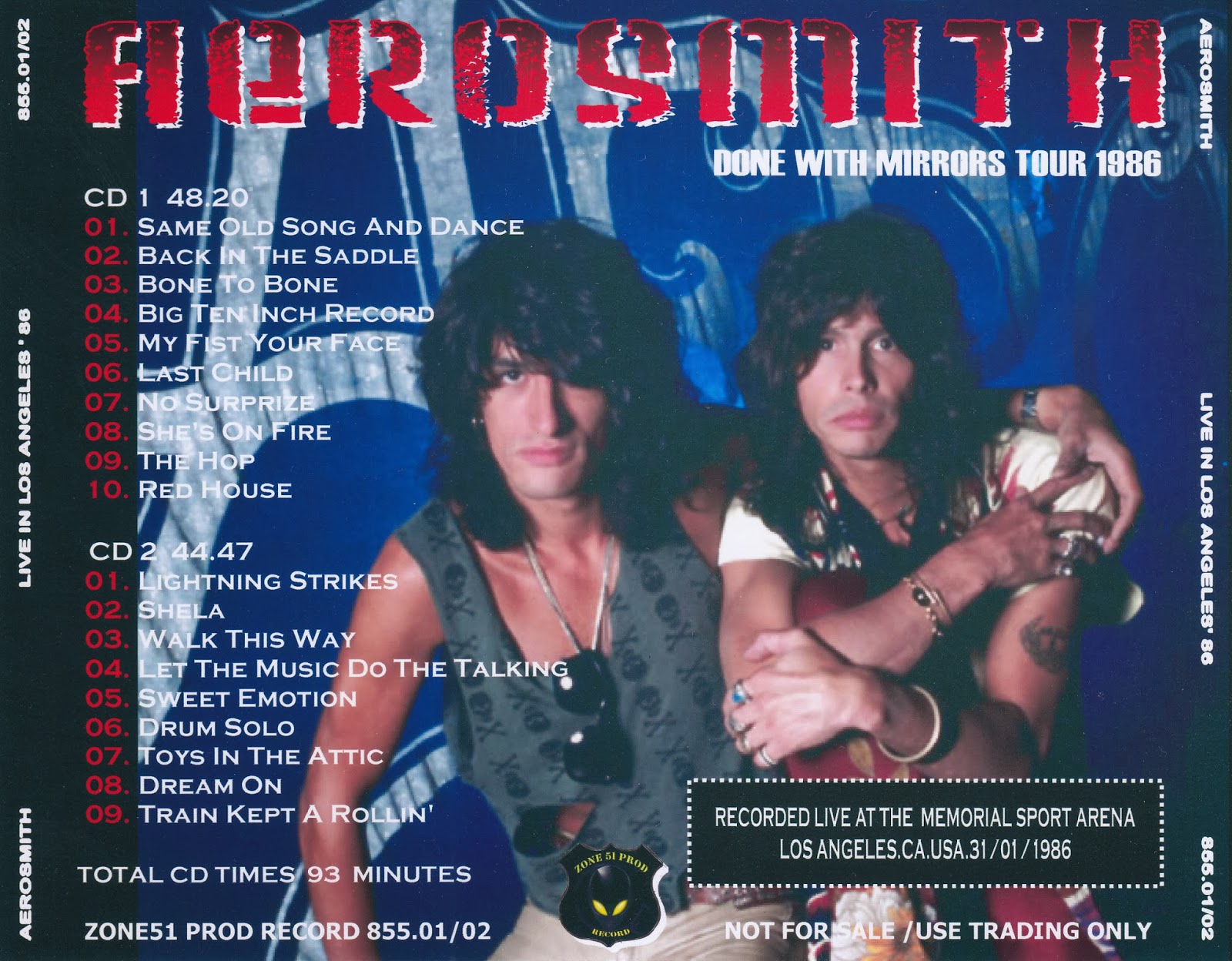 Comments:
Audience recording
Another "not so great" recording,
but what the hell...It's a great time in
Aerosmith history and it's FREE!
Have a listen and enjoy....
The first song is definitely poor,
but the sound improves to about
ga B-...some distortion caused by the kick drum again....
Publié par mothership51 à 8:05 PM No comments: 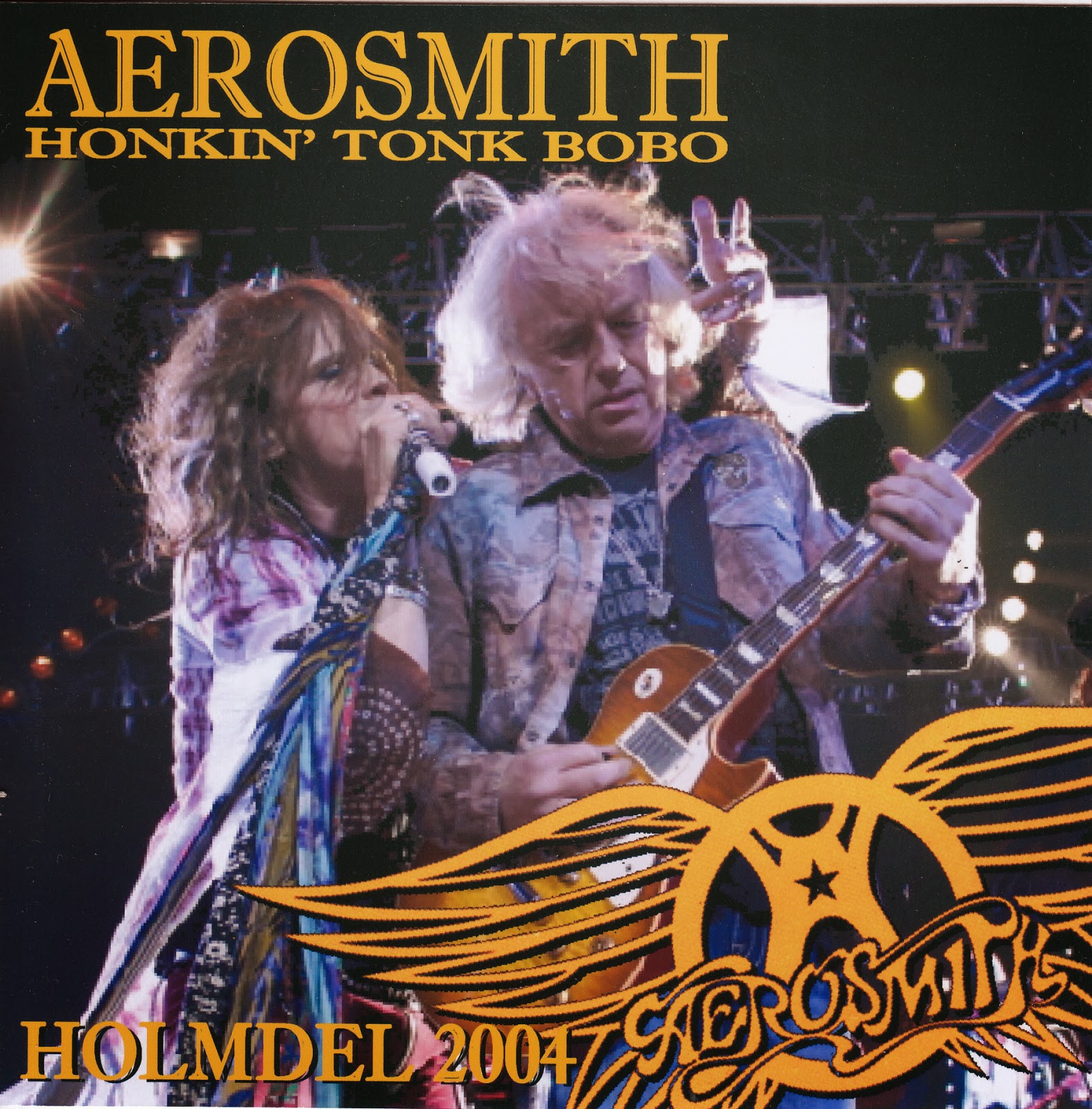 Comments:
Last North American show of the tour.
Only date of this tour that was postponed
(June 20 - due to Tyler being ill) and rescheduled.
Supported for this one date by AntigoneRising since Cheap Trick had commitments in Europe and were in flight to Europe on this day.
Addition of "Rag Doll" makes it the only appearance of a "Permanent Vacation" number this tour to date.
Last appearance of Honky Tonk Woman was September 19th 2001 when played in full on the B-stage (Antioch, TN).
Twelve songs were every present in the sets over the two North American legs: - "Baby Please Don't Go", "Cryin'", "Dream On", "Jaded", "Love In An Elevator", "Roadrunner", "Stop Messin' Around", "Sweet Emotion", "The Other Side",  "Toys In The Attic", "Train Kept A Rollin'" and "Walk This Way".
"The Other Side" was rested for the corporate gig in  Canada (April 18).
Only 6 of the 12 tracks were played from "Honkin' On Bobo" during the North American concerts with only 2 different  tracks introduced this tour ("Roadrunner" and "Back Back Train").  Four tunes left in the set with "Shame Shame Shame" rested this concert for "Big Ten Inch Record".
Audience recording
Publié par mothership51 à 8:00 PM No comments: