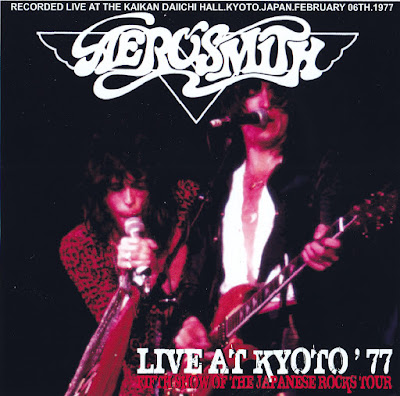 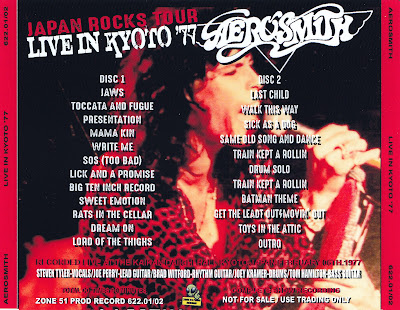 Comments :
Road manager Kelly repeats the intro
he gave back in Peoria during the
summer of 1976:   “Say, what are you
fellows doing here, and a queer, no shit."
It was probably lost on the Kyoto crowd as it us! Perry begins  the “Mama Kin” into in the wrong key, but quickly rights the ship. Tyler switches up the “Write Me A Letter” lyrics, subbing in “entice me” and “excite me” or the “write me” line. Roadie Kelly again seems to pipe up in the middle of “Rats In The Cellar.” Perry hits the wrong notes to start “Dream On” but the band carries on nevertheless. At the end of the songs the guitarists hold long notes as Kramer starts “Lord Of The Thighs.” Whitford has trouble finding the notes to start “Last Child,” a rare foul up for him. “Walk This Way” starts with a fast shuffle by Kramer, who then slows it down to start the song proper. Perry strums some cool notes into  “ Same Old Song And Dance” on this night. Perry also gives a great intro into “ Train Kept A-Rollin'” playing a bit of the “Stars Spangled Banner.” During his solo he gets the band into “Get The Lead Out” then  a brief “Adam's Apple” where Tyler joined him with maracas. The real treat comes when Perry shifts the band to “Moving Out,” which they jam on for a couple of minutes. The loud crowd claps to get the band back on stage for the encore. During the blues jam into “Toys In The Attic” Tyler takes on the role of auctioneer! Fabulous show in Kyoto recorded by Mr. Peach.