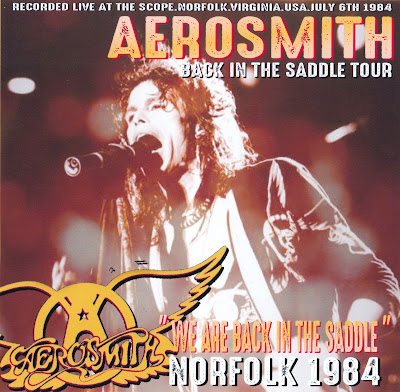 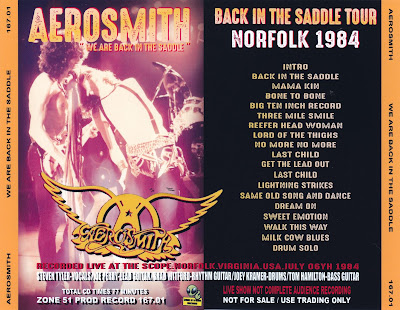 Comments :
Audience recording
The entire opening tape runs to its
conclusion before Kramer signals
the beginning of “Back In The
Saddle.” Right away there is some
trouble. “You better quit throwing
shit at us or we're gonna walk!”
Tyler says. “And you're gonna get
your ass kicked by everybody
around you,” as he slyly invites the
crowd to police itself. “You crazy
motherfuckers,” a somewhat stoned Tyler says after “Mama Kin” “Are you glad we are back in the saddle?” Firecrackers are thrown onstage as Kramer pounds his drums to start “Big Ten Inch Record.” The band stops momentarily, but rather than make an issue of it, Tyler blows into his harmonica after Perry re-counts the song in. Tyler announces “Three Mile Smile,” but only gets as far as “Three” before Kramer starts in. A bit too much reverb is used during “Lord Of The Thighs” and Tyler's voice echoes over itself in one spot. “A song that depicts our band and where it comes from,” Tyler says as he announces “No More No More.” “Mr. Brad Whitford, we wrote a song awhile back...” Tyler says as Whitford plays the opening notes and then Tyler sings “I'm leaving tonight... ” Tyler noted all the male funs up front then says, “Let me tell you something I need a woman up here to dance with,” Tyler says before “Lightning Strikes,” but given the singer's condition the band launches into the song not waiting to hear what he might say next. “I'll dedicate this song to my daddy,” Tyler says before “Dream On.” Kramer adds some additional percussion over Tyler's “Oh Well” recital during the “Sweet Emotion” intro as Whitford and Perry drive the song with their guitars. The last couple of songs apparently not recorded at the gig.