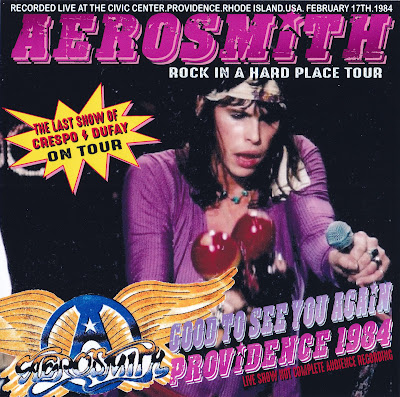 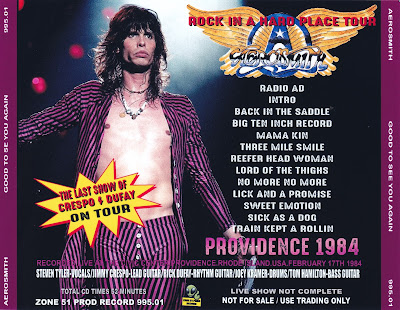 Comments:
Does Dufay know its last gig with the band? Almost seems so, as he plays
some discordant notes as “Back In The Saddle” begins. “Good to see you again!” Tyler says to the familiar room after “Mama Kin.” “Home sweet home!”
Dufay rides a nice long note during “Lord Of The Thighs” and plays a
cool, wandering solo. Aerosmith's most flamboyant guitar player ever!
Crespo has a nice response, playing his moody solo. In all candor, when
Whitford and Perry returned, they
were not as on point as Crespo and Dufay, at least initially. Dufay is at it again during “Sweet Emotion” playing some scracth rythym during Hamilton's bass intro. A rather sickly sounding “Sick As A Dog” is heard as the tape jams then shuts off, and a good chunk of the show goes missing. Thankfully, the recording resumes for “Train Kept A Rollin,'” the last tune played by the Crespo/Dufay duo. Aerosmith owes the pair a debt of gratitude. The end of the show brings an end of that era.