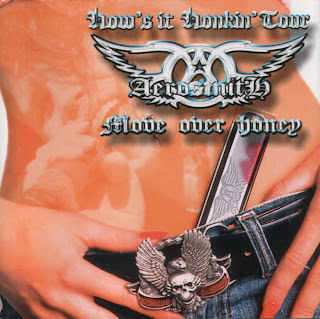 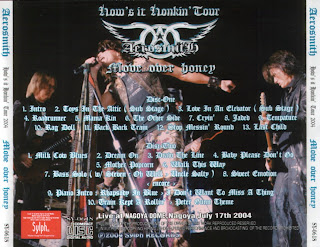 Format: 2 CDR,  22tracks, ~ 118min
Label: SYLPH 0618
Disc1 : 53.12
Intro
Toys In The Attic
Love In An Elevator
Roadrunner
Mama Kin
The Other Side
Cryin'
Jaded
Temperature
Rag Doll
Back Back Train
Stop Messin' Round
Disc 2 : 65.12
Last Child
Milk Cow Blues
Dream On
Draw The Line
Baby Please Don't Go
Mother Popcorn
Walk This Way
Oh Well/ Uncle Salty
Sweet Emotion
Rhapsody In Blue/I Don't Want To Miss A Thing
I Ain't Got You/Train Kept A Rollin'/Peter Gunn
Recorded at:
Nagoya Dome,Nagoya, Japan July 17, 2004
Comments:
Third date of the Japanese "Honkin' On Bobo" Tour and first date after Tyler's knee injury when he fell off the cat walk at Osaka and resulted in the cancellation of Hiroshima.
First play this tour of "Honkin' On Bobo" track "Temperature" which was played once on the "Rocksimas Maximus" Tour in 2003 (August 2, 2003).  Eighth track to be played from the album this tour.
First play of the "Uncle Salty" (partial) since it was played on the at the FIFA concert in Tokyo (June 27, 2002)
First play this tour in Japan (with last time played in Japan in brackets) of "Last Child" ( "Roar of the Dragon" tour 2000") "Milk Cow Blues ("Get A Grip tour 1994) and "I Don't Want To Miss A Thing" (FIFA concert 2002). Only 2nd appearance all tour of "Milk Cow Blues" (May 12, 2004)
"Train Kept A Rollin'" returns to it's roll of being used as a song where medley segments are included (like on the "Rocks" tour and earlier). First play in any form in Japan of "I Ain't Got You" which was last played on the "Girls of Summer" tour (Nov 2002).
Good audience recording
Publié par mothership51 à 6:55 PM