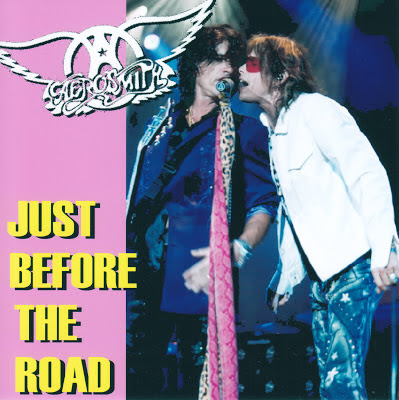 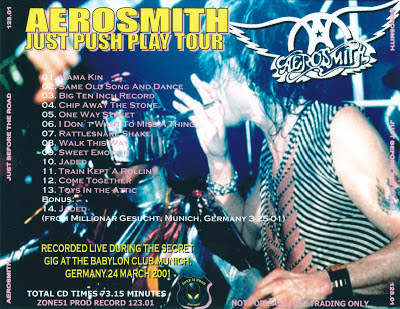 Comments:
Rare audience recording of a club performance
in Germany, just before the band hit the road
for the Just Push Play tour.
Small club gig in heart of Munich
(aprox 750 capacity) during German promotion
tour for "Just Push Play". They had on stage
with them, 5 robot women (dressed like the
album cover - 2 on risers at each end of the
stage, 2 at sitting down on the front of the
drum riser and 1 behind the drums)
who maintained positions on the stage
until the completion of "Train" and then
walked off with the band.
Original setlist detailed "Walkin' The Dog" after
"Chip Away The Stone" and did not include
"I Don't Want To Miss A Thing", "Rattlesnake Shake",
"Come Together" or "Toys In The Attic". Came on
stage at 9pm with the  concert finishing at 10.20pm.
In the case of the detailed encores, the band looked
to be leaving the stage when Tyler called them back
to carry on. After the band had left the stage after
"Train", the road crew started to pack the equipment away.
After 10 minutes, they quickly put everything back and
the band played two further numbers.
Reported they did a soundcheck earlier in the afternoon
of "Jaded", "Chip Away The Stone" and "Train Kept A Rollin'"
Apparently this show was planed to happen in London but
logistically easier in the timeframe to stage in Munich.
Tickets were selling on the black market in Germany for 120 DM - face value 23DM.