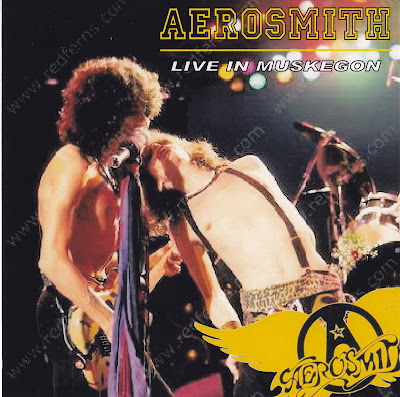 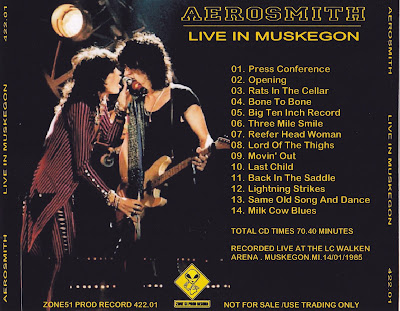 Format: 1 CDR,  14 tracks, ~ 70 min
Label: Zone 51 prod 422.01
Disc1 :
01.  Press Conference
02.  Opening
03.  Rats In The Cellar
04.  Bone To Bone
05.  Big Ten Inch Record
06.  Three Mile Smile
07.  Reefer Head Woman
08.  Lord Of The Thighs
09.  Movin' Out
10.  Last Child
11.  Back In The Saddle
12.  Lightning Strikes
13.  Same Old Song And Dance
14.  Milk Cow Blues
Recorded at:
the lc walken arena .
muskegon.mi.14/01/1985
Comments:
Aerosmith here on its "Back In The Saddle"
tour. The band reunited in 1984 and went out
on tour without a record. This is the last known
document of that tour. The recording opens
with a pre-gig press conference that was
recorded at the LC Walker Arena by local radio station WLAV, which is broadcasted
it after the fact in segments in the following weeks. Someone did a nice job of recording the segments and putting them together. Separately we have an audience recording of the gig itself, which starts off well enough. Through halfway of "Lord of the Thighs" the sound is solid, kinda loud, rattley and in your face like the band should be recorded. But middway through the tune the batteries seem to lose power and the tape begins to speed up and warble. From here out the show is pretty much a mess, speed fluctuations, poor sound, etc., but the tunes are still recognizable. Before "Three Mile Smile" Tyler quizes a band member (Perry?) about which album the tune is from, and he gets the wrong answer "Aerosmith."  An interesting artifact of the band, albeit flawed. A little bit of rock and roll history from Michigan!
Publié par mothership51 à 4:00 PM