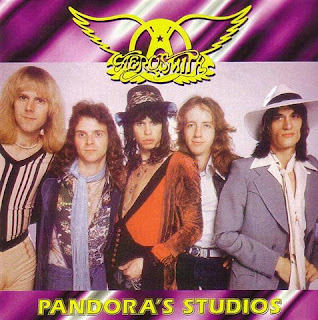 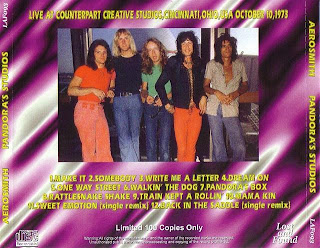 Format: CD, 10 tracks, ~55 min
Label: Lost And Found 093
Set list
1. Make it
2. Somebody
3. Write Me
4. Dream On
5. One Way Street
6. Walkin' the Dog
7. Pandora's Box
8. Rattlesnake Shake
9. Train Kept a Rollin'
10. Mama Kin
Recorded at:
Music Hall, Cincinnati, OH 10/10/73
Counterpart Studios, New York, 1974
Comments:
Very good stereo. The recording questions
information detailed in the Pandora's Box
booklet, which carries Walkin' The Dog and
Rattlesnake Shake from this set, and says it is
from 1971. It also details that it was
broadcast live by WKRQ, Cincinnati and
produced by Aerosmith.. The recording is
probably late '73 as it carries Pandora's Box
which wasn't recorded in the studio until
December 1973/January 1974. It does bring
into question whether this is recorded in
studios at New York given there is an audience.
Some reports quote it being done in Ohio,
probably Cincinnati. Tyler also says on
introducing Pandora's Box, "we'd like to play a boogie from our new album, entitled, Night in the Ruts" which was the title Get Your Wings initially went under. This version of the song carries different lyrics.
Rare live version of Fleetwood Mac's 'Rattlesnake Shake', a forerunner of 'Rats in the Cellar'.
Reissued as 'Rattlesnake Shake' LXXXIV No 18; on violet vinyl with approximately 100 numbered copies. To confuse issues further, the Ruthless Rhymes release seems to originate from Germany and carries the date (P) 1971 which is hard to swallow since the session comprises of all the Aerosmith LP's tracks apart from Movin' Out and this was the first track the band apparently wrote.
Publié par mothership51 à 6:14 PM